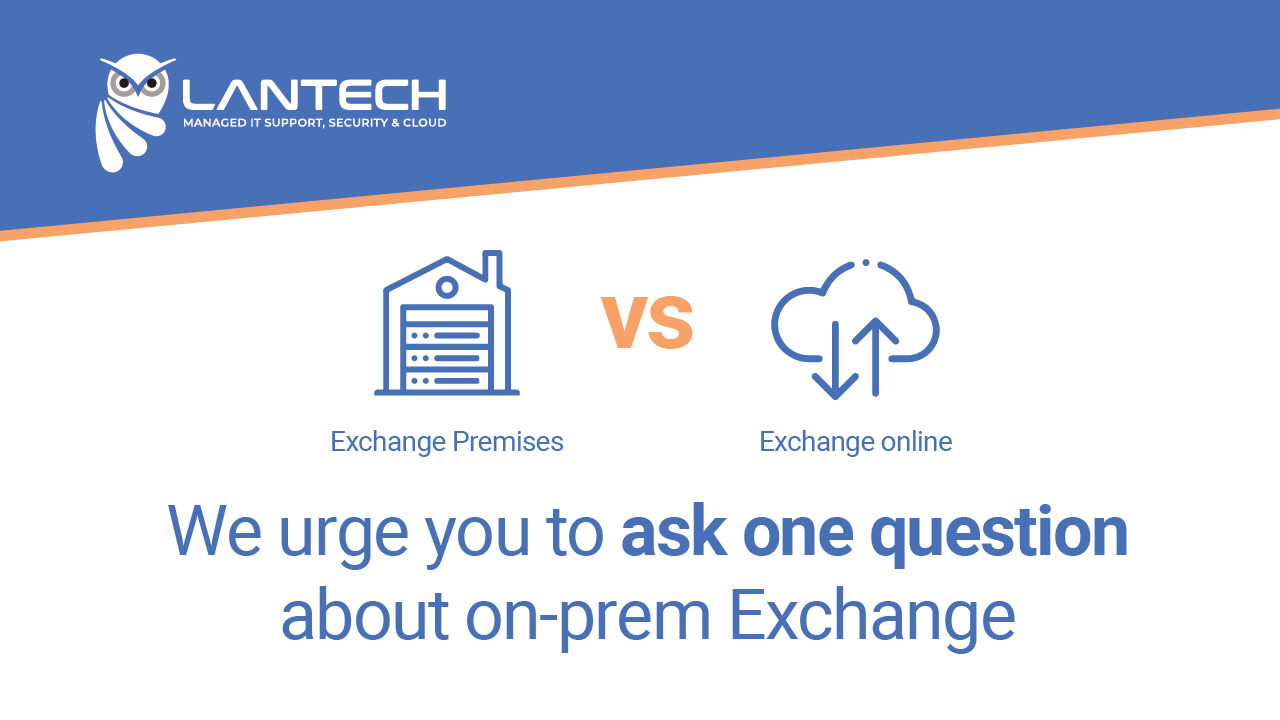 When to Outsource your IT Support?

The trouble with IT specialists is they don’t quite talk the same language as most people. We’re all a bit guilty of it – we’ll hold our hands up and admit that the phrase ‘on-prem Exchange’ is one you won’t hear in general conversation. But we’re still urging you to ask your IT team whether your business still relies on on-prem Exchange.

If they look blank, you should be very worried. If they say yes, take a deep breath and suggest a serious talk about your organisation’s IT strategy.

In basic terms, Exchange is a Microsoft product and if installed on a server in your offices (on-prem), you retain full control over the application (email) and hardware. The alternative is the cloud-hosted Exchange as part of Microsoft 365. As a user, it might not be evident which version you are working with. You’ll still see the same suite of products:  Word, Excel, Outlook etc.  Now, while the full control of on-prem Exchange might sound like an advantage, it comes with a significant amount of risk.

Last Thursday (Sept 29) Microsoft issued guidance for users of its Exchange product. New Zero-day vulnerabilities have been reported. These are weaknesses which attackers have discovered before Microsoft was aware of them – there’s no security patch ready and waiting. Since the 29th several updates have been issued aiming to mitigate risk and limit potential damage, but organisations’ IT teams need to be on the ball to action them. And of course, attackers are busy exploiting the situation.

Those using the hosted version – Microsoft 365 – don’t have this concern. Over the last decade, the product has demonstrated that it is the most secure option. What’s more, it offers users the twin benefits of reduced administrative overhead and improved productivity. It’s a rare business that doesn’t have both these items on its list of objectives.

So if when you asked that question, you learned that you are still reliant on on-prem Exchange, why is that? Sorry to be blunt, but what is stopping you from making the change?

We understand that the reasons could seem very legitimate: budget, skill, fears about jobs or the security of critical business data. But we’ve used the word ‘could’ deliberately in that last sentence.  The reported vulnerabilities show that it’s not keeping users safe, but all the reasons we quoted need balancing against the fact that using an on-premises solution could be holding your business back.

If you are using the old-technology, it is time for a serious talk about your IT strategy. We’d be very happy to have a conversation with you about that. No strings, no charge, just a look at what’s possible. And we’ll try very hard to keep the jargon in check.

When to Outsource your IT Support?

How does a cyber breach in healthcare impact services and what to do about it. (A real-life account)